Trust Me: the film

Trust Me: the film 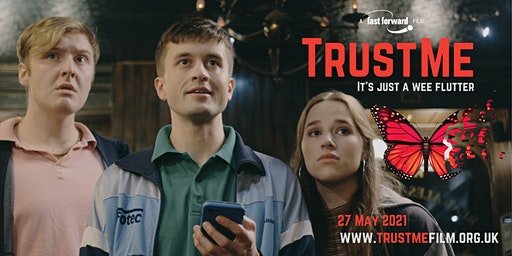 Here is a great example of FastForward’s work. Starting life as a play co-produced with young people the original toured schools in Scotland from the Borders to the Highlands, evolving over time to become a film. Trust Me was premiered across Scotland on 27 May 2021 as a live Youtube event. The screening was followed by conversation between the film’s director and the actors who then answered questions live from schools in Scotland.

Like all of Fast Forward’s work, there is no aim of telling young people what not to do. It is not prescriptive but descriptive, representing choices and journeys made by people in real life, allowing audiences to think for themselves about issues. The film’s website, where you can watch the film, includes sections for young people teachers and youth workers each with relevant supplementary resources.

It’s also very watchable – a must, of course! Click here to watch and find out more. Behind the film are years of hard work and commitment to the value of the arts in education, a clear example of the ‘creative spark‘.

This site uses Akismet to reduce spam. Learn how your comment data is processed.